MIAMI — A state review shows caseworkers with Florida’s Department of Children and Families are failing to comply with rules for giving powerful psychiatric medications to young foster children. 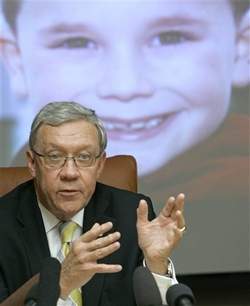 George Sheldon, Secretary of Florida's Department of Children and Families, speaks at a news conference regarding the use of psychotropic drugs by foster care children, Thursday, May 28, 2009, in Tallahassee, Fla. In background on video screen is a picture of foster child Gabriel Myers, 7, who apparently committed suicide last month while on psychotropic medication. Phil Coale/The Associated Press

The Miami Herald obtained the DCF report Tuesday. It reviewed the records for 112 foster children younger than age 6 being given the medications.

The review shows caseworkers failed to complete treatment plans, didn't consult psychiatrists contracted by DCF and failed to get consent for the drugs.

The state has been reviewing mental-health drug use among foster children since a 7-year-old boy given several psychiatric medications during a nine-month stay in foster care hanged himself in April.